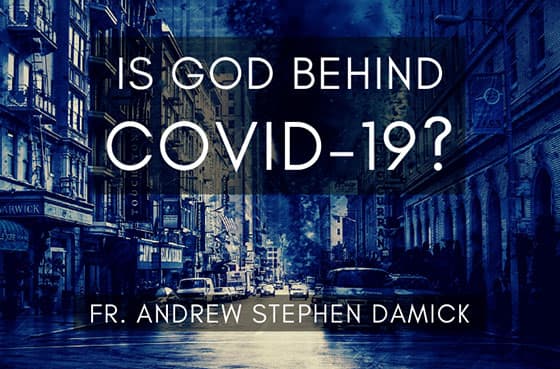 I am going to go ahead and say yes. But stick with me here, okay?

We Christians in the early 21st century tend to be spiritual people when we’re in church or praying but secular materialists much of the rest of the time. I don’t mean that we become unbelievers, but we do tend to act like them.

How do pastors and Christian teachers respond to this problem?

As I’ve read various Orthodox bishops and other clergy give direction to churches on how to respond during this time of outbreak of COVID-19, the novel coronavirus, it has been striking how much variation I’m seeing. There are some similarities, but there is not a consensus as to how to respond.

I’m seeing calls to change the way communion is distributed in certain ways, saying that this would just be temporary, and I’m seeing adamant refusal to do so, saying that we’ve done it this way for centuries even in times of far deadlier plague.

I’m seeing directives saying not to touch anything in the church at all, for clergy not to touch parishioners, for no one to kiss anything. I’ve even seen pictures from one parish on the Sunday of Orthodoxy where all the venerating icons were labeled “DO NOT KISS”.

Just how do I figure out who the “weaker brother” is, and how do I appropriately condescend to his weakness? And how do I decide who the “chaff” is that is separating from the “wheat,” doing what I have do to in order to be faithful, letting them fall away if that’s what they really want to do?

On the one hand, our forebears in the faith responded to pestilence by gathering for prayer and by ministering to the sick, sometimes even with thousands of people being carted out of cities daily in times of plague. And on the other hand, we do not want to put vulnerable people at risk unnecessarily.

One thing I will say that I am grateful for seeing is that almost all directives from bishops and clergy are saying to pray, indicating a belief that prayer is indeed effective and called for in a time of pestilence.

But one thing I’m not seeing and really do want to see more of is a call for repentance.

I know, I know: The Interwebs and Dollar-a-Holler radio are full of people proclaiming that this is God’s apocalyptic judgment on the world. You don’t have to look very far to find someone declaring as loud as he can that God is finally letting us have it.

But here’s the thing that most of our modern doomsayers out in the world are getting wrong about this: They are correct in that God allows disaster as a response to sin. There is no question of that. But what they are getting wrong is that they are putting this response in the second or third person — this is God’s response to “your” sin or “their” sin. And they may point to homosexuals or Democrats or Republicans or Muslims or Communists, etc., and say that God is sending this to punish those people.

Separating evil in this world from the demonic forces that move and shape it is something that Christians cannot do. And we know that God permits demons to run amok at times for two purposes — to bring justice to the wicked and to inspire repentance.

And the latter often works to purify us as we look to Him. Repentance in the midst of suffering does not mean that we are saying God is punishing us. Repentance is about turning more to Christ and becoming more like Christ. And suffering often is the only way we can do that.

And part of how we repent is to commit to helping those vulnerable in times like this. We have to be smart and do it well. But we have to do it. Because everything is spiritual. Nothing is a secular, material space into which the spiritual does not enter.

Of course certain adjustments of certain kinds are going to have to be made. But there are also certain things that cannot be adjusted, certain beliefs and practices that are non-negotiable.

If we are really Christians, then we are consistent with our tradition when we interpret suffering in this way, that it is permitted by God precisely because of my sins. And I cannot think of anything more Lenten than that.

Lord, grant me to see my own sins, and not to judge my brother, for Thou art blessed unto ages of ages. Amen.

The Very Rev. Archpriest Fr. Andrew Stephen Damick is pastor of St. Paul Orthodox Church of Emmaus, Pennsylvania, author of Orthodoxy and Heterodoxy, Bearing God and An Introduction to God. He is also host of the Amon Sûl, Orthodoxy and Heterodoxy and Roads from Emmaus podcasts on Ancient Faith Radio, co-host of The Areopagus podcast, and he is a frequent speaker at lectures and retreats both in parishes and in other settings. You can follow him on Facebook and Twitter.
Tags: COVID-19 Current Events Disease
Previous
Next
SearchPostsLogin
The Absurdity of Life Without God
Is God Behind COVID-19?
Coptic Identity: An Analysis on our Roots and our Future
Coptic Orthodox Statement on the Death of George Floyd
The Folly in our Understanding of Faith and Reason
Five Ways to Help Children Fight Fear