“When a thought oppresses you, do not be downhearted, but put up with it in courage, saying, ‘They swarmed around me closer and closer, but I drove them back in the name of the Lord’ (Ps. 118:11). Divine help will arrive at your side immediately, and you will drive them away from you, and courage will compass you round about, and the glory of God will walk with you; and ‘you will be filled to your soul’s desire’ (Isa. 58:11).”
— Pachomius the Great 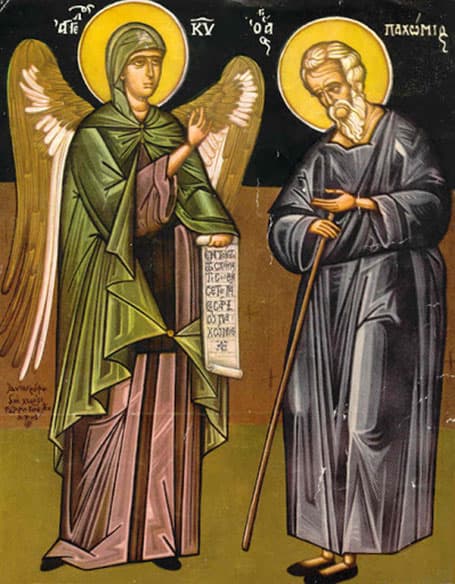 Our venerable father Pachomius the Great (292-346 A.D.) was an early Egyptian ascetic. St. Pachomius is well known for many things but he is most known for being the founder of cenobitic monasticism in Egypt. Pachomius was born to pagan parents in Thebaid (Upper Egypt). There he received an excellent secular education.

At the age of either 20 or 21, he was called to serve in the Roman army. He became a high ranked officer in the army and was touched by the love of the Christian people of Esna in Upper Egypt. It was then that he stayed in a prison, used to house the new conscripts, which was run by Christians. So he decided that if he would return safely from the war he will seek to learn more about Christianity. He was so impressed by their love and compassion to others that he vowed to become a Christian after his military service ended.

Thus in 314 Pachomius was baptized and began to practice the ascetic life. Three years later he withdrew to the desert under the guidance of the elder Palamon. According to tradition, after ten years with Palamon he heard a Voice telling him to found a monastic community at Tabbenisi (also Tabenna, Tabbenisiot). He and Palamon traveled there, and subsequently Pachomius had a vision in which an angel came to him, clothed in a schema (a type of monastic garment), and gave him a rule for the cenobitic life.

Cenobitic (or coenobitic) monasticism is a monastic tradition that stresses community life. The older style of monasticism, to live as a hermit, is called eremitic. Pachomius’ rule balanced the communal life with the solitary life; monks live in individual cells but work together for the common good.

Christian monks of previous centuries were usually hermits, this form of solitary living, however, did not suit everyone. Some monks found the eremitic style to be too lonely and difficult; and if one was not spiritually prepared, the life could lead to mental breakdowns. For this reason, organized monastic communities were established so that monks could have more support in their spiritual struggle. While eremitic monks did have an element of socializing, since they would meet once a week to pray together, cenobitic monks came together for common prayer on a more regular basis. The cenobitic monks also practiced more socializing because the monasteries where they lived were often located in or near inhabited villages.

Cenobitic monks were also different from their eremitic predecessors and counterparts in their actual living arrangements. Whereas the eremitic monks (“hermits”) lived alone in a monastery consisting of merely a hut or cave (“cell”), the cenobitic monks (“cenobites”) lived together in monasteries comprising one or a complex of several buildings. In the latter case, each dwelling would house about twenty monks, and within the house there were separate rooms or cells that would be inhabited by two or three monks. This structure of living for the cenobitic monks has been attributed to St. Pachomius, who is thought to have gotten the idea for living quarters like these from the time he spent in the Roman army, as the style is very “reminiscent of army barracks.”

St. Pachomius was strict with the community of monks that began to grow around him. He gave everyone the same food and attire. The monks of the monastery fulfilled the obediences assigned to them for the common good of the monastery and nearby community. His disciples (the monks) specialized in different kinds of services. Some were responsible for educating the people by teaching them how to read and write, some helping and treating the sick, some cultivating the land to provide food for the monastery and for the hungry (especially at time of famine) but the monks were not allowed to possess their own money nor to accept anything from others, even their relatives.

St. Pachomius considered that an obedience fulfilled with zeal was greater than fasting or prayer. He also demanded from the monks an exact observance of the monastic rule, and he chastised slackers. Once he even refused to speak directly with his own sister in order that he might maintain his detachment from the world. He did, however, talk to her through a messenger, and he blessed her desire to become a nun. Soon after, she had her own all-female monastic community.

A Life of Love

St. Pachomius lived the rest of his life managing his monastery, performing wonders, fighting the demons, and of course in fervent prayer. Near the end of his life he was granted another vision: the Lord revealed to him the future of monasticism. The saint learned that future monks would not have such zeal in their struggles as the first generation had, and they would not have experienced guides. Prostrating himself upon the ground, St. Pachomius wept bitterly, calling out to the Lord and imploring mercy for them. He heard a Voice answer, “Pachomius, be mindful of the mercy of God. The monks of the future shall receive a reward, since they too shall have occasion to suffer the life burdensome for the monk.”

By 348, St. Pachomius directed almost three thousand monks. This, however, was also the year that he was infected by some form of plague or pestilence. He never hesitated to help sick and, as he was serving those who had been affected by the epidemic plague, he himself got the disease and died. These are just very few thing about his life, a great example of “love never fails. His closest disciple, St. Theodore (May 17th), tended to him with filial love. St. Pachomius died around the year 348 at the age of fifty-three, and was buried on a hill near the monastery.

He is celebrated by the Church on May 15th and is one of the few non-biblical saints to be venerated by Oriental Orthodoxy, Eastern Orthodoxy, Catholicism and some Protestant Churches.

SearchPostsLogin
The Absurdity of Life Without God
Is God Behind COVID-19?
Coptic Identity: An Analysis on our Roots and our Future
Coptic Orthodox Statement on the Death of George Floyd
The Folly in our Understanding of Faith and Reason
Five Ways to Help Children Fight Fear