“We magnify you, O mother of the True Light and glorify you O Theotokos, the Holy Virgin, for you have born for us the Savior of the world, who came and saved us.” 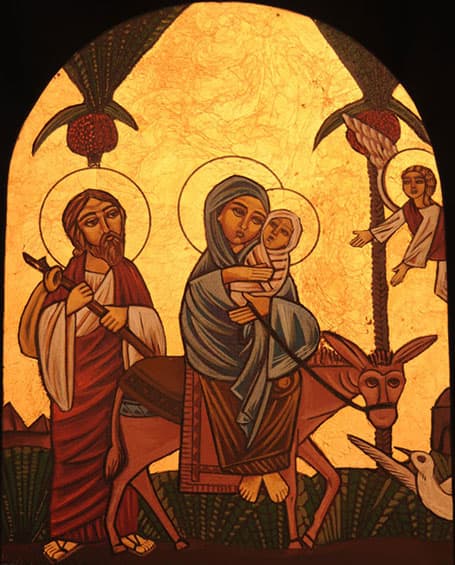 No other personality from the New or the Old Testament has been venerated like St. Mary. She has been raised in status above the Cherubim and the Seraphim, for she has said through the Holy Spirits, “…behold, henceforth all generations will call me blessed. For He who is mighty has done great things for me, and holy is His name.” (Lk 1:48-49)

St. Mary’s parents, Joachim and Anne, were righteous people in front of God. They prayed earnestly asking God to grant them a child. Six years after they were married, they had Mary, and they knew that she was a special gift from God. They gave her the name “MARY” which means “Royal Incense” because she would become a special offering to God. When Mary was three years old, Joachim and Anne took her to the temple and dedicated their child to God. She spent nine years in the temple. When Mary was twelve years old, Zacharias the priest wanted to find a suitable man who could take care of her. He gathered the canes of her male relatives, and put them in the temple. The next day the cane of Joseph the carpenter budded, just like Aaron’s rod in the Old Testament (Num 17:8). So Mary and Joseph became engaged. “Now the birth of Jesus Christ was as follows: After His mother Mary was betrothed to Joseph, before they came together, she was found with child of the Holy Spirit. Then Joseph her husband, being a just man, and not wanting to make her a public example, was minded to put her away secretly. But while he thought about these things, behold, and angel of the Lord appeared to him in a dream, saying “Joseph, son of David, do not be afraid to take to you Mary your wife, for that which is conceive in her is of the Holy Spirit. And she will bring forth a Son, and you shall call His name JESUS, for He will save His people from their sins.” (Mt 1:18-21)

Our Church, inspired by the Holy Spirit, venerates St. Mary more than any other personalities in the Bible, because God took flesh from her. Therefore, she became like a second heaven or a dwelling place for God.

The Titles of the Holy Virgin Saint Mary Our Lady, the Mother of God

St. Mary has many titles that are used by the Coptic Orthodox Church such as:

The Theotokos in the Feasts of the Coptic Orthodox Church

Each saint in the Church has one feast, usually commemorating departure or martyrdom. Some saints have an additional feast marking the finding of relics, a certain miracle to which that saint is given credit or the consecration of a church in his or her name. The Virgin Saint Mary, on the other hand, has many feasts:

All of these feasts have special hymns and doxologies in the rites of the Church, which contain within them many prophecies and symbols concerning Saint Mary in the Old Testament.

For two thousand years the Church has preserved the memory of the Virgin Mary as the prototype of all Christians – model of what we are to become through Christ. St. Mary was truly pure and unconditionally obedient to God. The tradition of the Church holds that St. Mary remained a virgin all her life. While lifelong celibacy is not a requirement for all Christians to follow, St. Mary’s spiritual purity (her whole hearted devotion to God) is certainly to be emulated.

St. Mary is also our model in that she was the first person to receive Jesus Christ. Because she bore Christ in her womb physically, all Christians now have the privilege of bearing God within them spiritually. The honor we give to St. Mary also signifies our view of who Jesus is. From early times the Church has called her Mother of God (Theotokos), a title which implies that her Son is both full man and full God. As His mother, she was the source of His human nature; even though the One she bore in her womb was the eternal God. Therefore, because of her character and her role in God’s plan of salvation, we appropriately honor St. Mary as the first among the saints. The archangel Gabriel initiated his honor to her when he addressed her with the good news of the Annunciation, as did Elizabeth (Lk 1:28,42). St. Mary herself, by the inspiration of the Holy Spirit, predicted the honor that would be given to her throughout history (Lk 1:48).

In obedience to God’s clear intention, our Church honors St. Mary through icons, hymns, and special feast days. We entreat her as the human being who was most intimate to Christ on earth, to intercede with her Son on our behalf. We ask her, as the first believer and the mother of the Church, for guidance and protection. We venerate her, but do not worship her. For worship belongs to God alone. We remember her in all of our prayers, which gives her an unique place in our church and hears. We still remember her miracles and her awesome apparel in our churches.

We ask Saint Mary to remember us O faithful advocate, before our Lord, to ask His forgiveness of our many sins.

SearchPostsLogin
The Absurdity of Life Without God
Is God Behind COVID-19?
Coptic Identity: An Analysis on our Roots and our Future
Coptic Orthodox Statement on the Death of George Floyd
The Folly in our Understanding of Faith and Reason
Five Ways to Help Children Fight Fear